Sloan is currently known for her work as one of the leading  “diagnostitians in the complementary therapy world” She is often commended for having the fastest results in the shortest time often tackling problems that have yet to be solved by others. She achieves this by bringing together a wealth of experience from over a decade of practice. Sloan is unique in the fact that she has trained in so many different areas using their diversity to fix problems that a single qualified practitioner may not be able to address.

Sloan was originally known in her capacity as an experienced therapist and success coach, but she is impossible to pigeon hole. Over the last 15 years, she has had the opportunity to work in many different arenas from legal to political, medical to media, and corporate to academia. Educated at Oxford University where she originally read Medicine, Sloan then attended University College London before converting to Law studying at the College of Law. Sloan continued her education at Hertfordshire University and then at King’s College London, to name but a few. Sloan has enough experience of someone twice her age.

Sloan has collaborated with some of the finest institutions in the country, if not the world and has had the pleasure to work with some very talented individuals taking them to even greater heights. She now writes as Sloan on numerous projects, while still finding the time to continue as a therapist and coach. On a slight tangent to her medical background, her side interest is Medical Ethics, in which she acquired a Masters of Law.

In her spare time, when she is not fundraising for numerous charities or coaching rowing, Sloan is often seen debating with the best on topical issues.

Find out more about Sloan at www.book-sloan.com

Sloan Sheridan-Williams is a uniquely talented London life coach and respected relationship expert who is often asked to appear in the media. She is able to provide expert commentary on a wide range of topics thanks to her unrivalled training in a variety of different disciplines and over a decade of experience achieving extraordinary long-lasting results for her clients who include celebrities, top athletes, business leaders, entrepreneurs and those who are passionate about getting the best out of life. 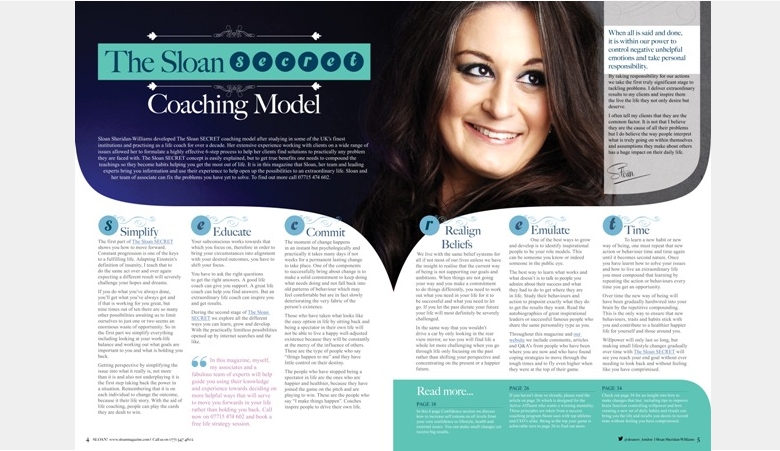